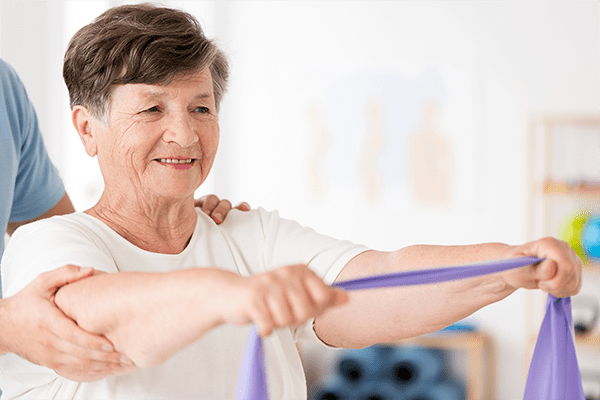 Daily exercise has manifold benefits that can boost cognition and slow memory loss.

Test their recall with memory games

Memory games are a simple exercise that can be done anywhere. During long trips or periods of waiting, invite seniors to memorize a list of words, colors, items, etc. Then have them recite it back. If that’s too easy, raise the difficulty level by having them recite as quickly as possible. Play memory games on a smartphone or tablet. Or, to prevent accidentally making in-app purchases, play traditional card or board games.

Games of possible interest include matching (pairing up) cards (the commercial game is actually called “Memory”), shape sorting, watercolor boards with number-to-color matching and word-association games. You can also play a mimicking game in which a person memorizes a string of movements or poses in the other. Some games allow for multiple players, making for exciting family gatherings that double as a memory-boosting event for everyone.

Seniors can exercise their memory by playing a beloved instrument or learning how to play a new one. Both will keep minds active, slowing cognitive decline and improving memory. They can also strengthen fingers, feet (if the instrument has pedals) and arms. If able to handle the weight of a guitar strap, try playing while standing and slowly moving around.

If the physical demands of musical instruments are too much, try learning a foreign language. Make it a family affair, involve the grandkids for the added companionship and as a conversational buddy. This exercise stimulates anyone’s brain and can reduce the risk of memory loss. It’s also an opportunity to learn about a new culture, as languages and cultures are closely intertwined. Both will stimulate memory and recall skills.

Walk around a social event

We all need social engagement—with family, community, the world. Encourage seniors to converse with others. If possible, take a short walk or play games while conversing. It’s more stimulating than you realize. Dialogue increases brain activity, focus and multi-tasking. Research also shows that socialization is a necessary component of maintaining and improving mental functions.

For those further along Alzheimer’s progression, offer periodic rest sessions. Too much mental stimulation all at once might agitate and trigger a mood swing. When taking a loved one to highly active or engaging environments, be understanding of sensory limitations. Social events should stimulate the mind only to the extent comfortable.

If you frequent parks, you might have seen seniors practicing slow, measured movements. It might look like slow-motion stationary dancing. It’s actually an ancient Chinese exercise that improves balance, coordination and breath control. Highly praised for its low-impact movements, it can help seniors reduce the risk of falls and severity of joint pain.

Tai chi can also help seniors with memory loss as it involves memorization of moves. In a study conducted by a professor at the University of South Florida College of Public Health, seniors who regularly practiced tai chi increased brain volume. The study concluded that frequent physical and social exercise can possibly reduce the risk of Alzheimer’s.

For newcomers to tai chi, try one of the beginner routines shared online. Modify to accommodate each person’s ability. This is not a contest. Some seniors practice while sitting, focusing on arm movements and shifting legs to different positions. Tai chi can also be a family activity, providing multiple benefits for all ages.

Research has shown that yoga can delay or reduce the risk of Alzheimer’s. In a 2016 UCLA study, researchers found that seniors who did weekly 60-minute yoga exercises over 12 weeks improved their spatial, verbal and long-term memory. Other research shows improved executive functioning which involves decision-making.

Many of these benefits are due to the meditative and physical requirements of yoga. Both the mind and body are trained, two areas key to preventing memory loss. Other benefits include decreased blood pressure and stress.

MorningStar Senior Living is dedicated to offering compassionate care by meeting each resident’s social, emotional, physical and spiritual needs. If you’re a senior or adult relative of a senior, refer to our Decision Guide to determine the best time to consider the advantages of assisted living communities.