The Health Benefits of Blueberries

The Health Benefits of Blueberries 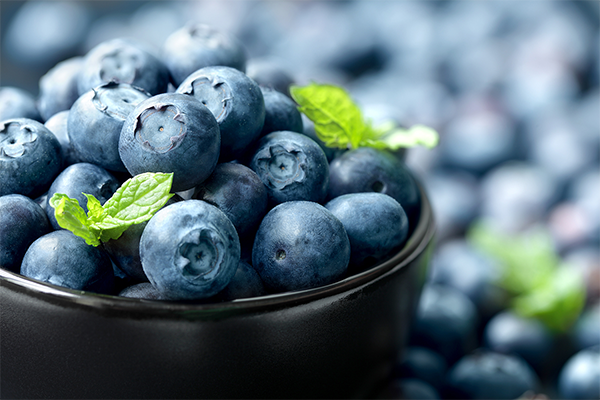 Blueberries pack a healthy punch, whether you eat them whole or blend them into a savory sauce.

THE HEALTH BENEFITS OF BLUEBERRIES

You see them in pies and muffins, as well as on top of someone’s favorite cereal. They blend beautifully to make smoothies and ice cream. You can eat them out of a bag or as a part of a delicious summer salad.

The sweetness and versatility of perhaps the most popular of the berry family possesses one attribute that is often overlooked. Blueberries pack a healthy punch, whether you eat them whole or blend them into a savory sauce.

One cup of fresh blueberries delivers 85 calories, around 20 grams of carbohydrates, and four grams of fiber, and we are just getting started with the nutrients that make the fruit one of the healthiest foods that you can eat. Bone-strengthening vitamin K and immune system bolstering vitamin C headline the nutrients in blueberries.

One cup of blueberries contains the Recommended Daily Intake (RDI) of the following nutrients:

Federal government research demonstrates that among the most popular fruits and vegetables, blueberries rank near the top for containing the highest concentration of antioxidants. The concentration of antioxidants that are typically found in blueberries helps prevent inflammation, as well as decrease the amount of oxidative stress. Oxidative stress occurs when the body experiences an imbalance between the number of free radicals that damage cells and the body’s capability to fend off the harmful effects of free radicals.

What does all the science mean? It means blueberries are effective at limiting DNA damage, which slows down the aging process.

The lion in the Wizard of Oz traveled through the most dangerous elements of nature to receive a heart. Did the lion eat blueberries to keep his heart healthy? He should have, as blueberries have demonstrated to be effective at fighting against heart disease.

The Center for Disease Control and Prevention (CDC) says heart disease is still the number one reason for fatalities among both men and women. Because blueberries decrease inflammation and alleviate oxidative stress, the fruit helps lower the risk of stroke and heart attack.

A recent study examined the relationship between blueberries and heart health. Over the course of six months, one group of men consumed blueberries while the other group of men provided the study with the placebo effect. The group of men that ate the blueberries experienced significant improvement in the function of their arteries, as well as healthier cholesterol profiles.

The scientists running the study concluded that blueberries can play an important role in the fight against heart disease.

In another study of 16,000 older adults, the participants in the study that consumed the most blueberries benefited from the slowest rates of decline in brain function.

Exercise is one of the best things you can do for your health. Unfortunately, as we age, our muscles take longer to recover and in some cases suffer from damage. The result is aching muscles that inhibit our physical capabilities. Blueberries are the solution to producing resilient muscles. One study observed female athletes to determine whether what they consumed limited or prevented exercise-induced muscle damage (EIMD). The females that drank a blueberry smoothie after a workout experienced far less EIMD than the female athletes that drank a placebo smoothie.

The Bottom Line: Eat Blueberries Throughout the Year

Plenty of science has been devoted to the health benefits of blueberries. However, you might be thinking, “Hey, I don’t live in the tropics. How can I consume blueberries when Old Man Winter arrives.”

At MorningStar, our senior living dining experience is inspired by the belief that diet is the centerpiece of personal wellness. With that as a priority, we seek to understand the different dietary needs of residents, and the universal need for heart-healthy choices, designing our menus accordingly.